A shop on the first floor with the French flag, opposite Mitsuhara-san Today is the story of French cuisine for the first time in a long time!

The theme this time is [Von Blanc]!

This von Blanc is a white (transparent) "fon (dashi)" made from chicken gala, which is also important in French cuisine.

I have explained about "phone" in the past, but this time I would like to explain how to make it easier at home.

The soup stock of this "von Blanc" is an indispensable phone for French cuisine, which is used not only for chicken sauce and stewed dishes, but also for vegetable soups and meat dishes other than chicken dishes.

Not limited to meat dishes, the number of chefs incorporating fish dishes is increasing, and it is attractive that the range of applications is wide.

In the method of making "von Blanc" introduced this time, the ingredients are whole chicken and old chicken for soup stock, flavored vegetables, spices, and herbs.

Boil the chicken once, add other ingredients and simmer it in water.

When boiling chicken, boil it once to remove the lye and odor, but be careful about the amount of heat and water at this time.

Keep the amount of water as small as possible and bring it to a boil in the shortest amount of time to simmer a large amount of lye.

Once boiled and strained, boil it once more to remove the lye.

This will give you a clear, transparent phone.

This time I will introduce one whole chicken, but if you want to prepare it more easily, you can change it to chicken wings instead of the whole chicken.

The merit of chicken wings is smaller than that of whole chicken, so it takes less time to boil, and it contains a lot of gelatin, so you can get a good stock just by boiling it for about 2 hours.

1. Cut the carrot into large pieces and make a cross-section cut to make it easier for the fire to pass.

2. Peel the onion, put the cloves in it, make a notch and put the bay leaf in between. 3. For garlic, cut one strain in half with the skin on the side.

4. For herbs, parsley stems are sufficient.

①. Fill a pan with water enough to soak in the meat and fluffy meat of a., Boil over high heat and boil. As soon as the water is boiling, the lye comes out, so immediately raise the meat from a. To a colander and discard the hot water with the lye. (Spilled)

②. Return the chicken from ① that has been boiled once to the pan, and then pour plenty of water and boil it. As the hot water approaches 100 ° C, the lye floats. Carefully scoop it with a ladle.

③. Add the remaining flavored vegetables and herbs, and simmer as it is with just enough heat to shake the surface.

④. If you simmer for 4 to 5 hours, you will get enough soup stock. Strain this with a fine-grained Chinois (straining net).

⑥. It is completed when it is strained again with fine-grained Chinois. Allow to cool before storing in the refrigerator. If you don't use it immediately, you can store it frozen.

○ If you use the von Blanc introduced this time in addition to sauces, soups, or stewed dishes, your usual dishes will be delicious, so please make sure to keep them.

Thank you for reading to the end! We hope that it will take root in this town like a cherry blossom and become a shop loved by everyone. 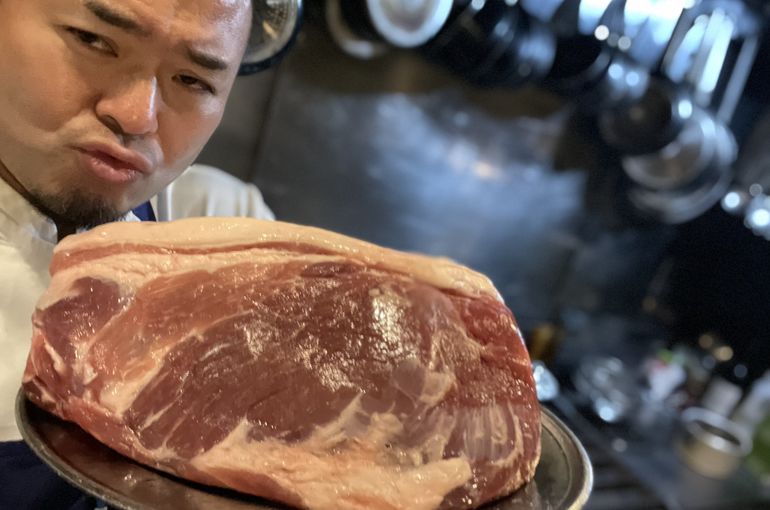